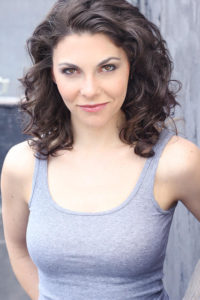 West Side Story, Billy Elliot, Pippin, Hello Dolly, Gypsy, Spamalot, and Legally Blonde are just a few of the many musicals Rachel Beiswenger has performed in.  She is currently an actress pursuing her passion in New York City.  Rachel began her dance training at Chester Valley Dance Academy at a young age and performed lead roles in the studio’s annual Nutcracker such as Snow Queen, Arabian, and Dew Drop. After graduating from Great Valley High School, she went to study Dance Performance at Towson University.

At Towson, Rachel studied ballet and modern, performed with the college dance company as well as in many student choreography showcases. Rachel remembers, “These showcases were always really fun because they were performed in the black box theatre, making it more intimate.”  Reflecting on her collegiate dance training, Rachel found it to be much more intense, “The training in college was a lot more intense because we were being graded, which I had never experienced before, and were dancing pretty much all day. We had mid-terms and finals in our dance classes and had to prove to the faculty our sophomore year that we were improving enough to stay a dance major (that was scary!).” Rachel also explored choreography, which she found very challenging but equally rewarding.  She also had opportunities to work with guest artists in various styles of dance like African, Indian, and Gum Boot dancing. Her favorite guest artist was Carlos Danaan who choreographed an advanced ballet piece that featured Rachel in a pas de deux.

Reflecting on her college dance experience, Rachel acknowledged how important her training was at CVDA:

My experience and training at CVDA were crucial to my dance education during and after college. Being a part of the CVDA community since the age of four taught me a great deal of self-discipline, respect for the art of dance and my teachers, and how to be a good person overall. All these years later, I still admire and look up to all of my teachers from CVDA, especially Miss Cathy. She has always made CVDA a safe, welcoming and warm environment, and I try to keep that feeling with me wherever I get to dance.

Currently, Rachel lives and works in New York City pursuing her acting career.  She is constantly attending auditions all across the city.  In Rachel’s last show, she played Velma, the lead Jet Girl, in the production of West Side Story.  She was also the dance captain and was responsible for not only knowing all of the choreography but rehearsing it with the cast to keep it clean.

Rachel was kind enough to answer a few questions about her career in theater:

How did you get involved in theater productions?

I became involved with theatre my sophomore year of high school when I joined my drama guild and fell in love with musicals. I performed in three productions and my senior year was lucky enough to play one of the leads in our show, and I even won an award!

What has been your favorite production?

My favorite show that I have actually been in twice is Spamalot. It’s the most fun I have ever had on stage, and what makes it fun is that the show slightly changes from performance to performance, which keeps it fresh and interesting. Everyone in the show also has at least ten costume changes, if not more, and that makes the show go by really fast.

What are you doing now in addition to acting?

Currently, I am living in New York City and still pursuing theatre, which involves a lot of auditions. I just started a new job at a fitness studio called Switch Playground, which has been really cool. As a dancer and performer it’s important to me to stay in shape and take care of myself, so working at a fitness studio makes sense.

Musical theatre auditions are extremely different from dance company auditions. Most of the ones I attend are dancer calls, so we dance first and then sometimes people are kept to sing, sometimes not. It took me a really long time to learn how subjective this business is, meaning nine times out of ten it has nothing to do with your talent, but more with what the casting team is looking for. You could be brunette and they want a blonde, really tall but they’re looking for a shorter dancer. What I’ve learned from the countless auditions I’ve been on is to just be myself and have fun! It’s important to stay true to yourself as a performer and an artist and let that shine through in your audition.

What advice do you have for CVDA dancers that want to pursue performing arts after high school?

I really think that anyone who wants to pursue performing arts after high school should 100% go for it if they are 100% passionate about the arts. It’s a tough business and so much of it is out of our control as a performer and unfortunately, rejection is a big part of the job. With that being said, it is the most rewarding and fulfilling job and I consider myself lucky that after all these years I’m still able to dance and perform. Determination and perseverance are everything, and if you stay focused and true to yourself you will go far. For those future performers from CVDA, know that you will always have a family back home that will support and encourage you!