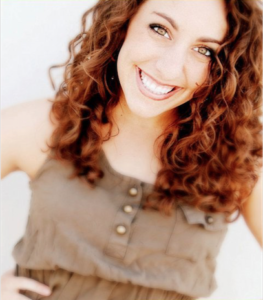 Emily O’Connor began her dance training at Chester Valley Dance Academy and studied all styles of dance.  After graduating high school from Villa Maria Academy in 2007, she moved to Corona, California to pursue her passion by joining The Young Americans College of the Performing Arts.  From 2007-2011, she studied a variety of performing arts and general education classes earning a Performance Certification.  She would go on to perform on eleven world tours with the Young Americans, and more as the company manager.

The Young Americans is a performing arts group that brings workshops to communities.  In these workshops, students learn vocal techniques, dance, acting and improvisation, and more.  At the end of the workshops, students perform alongside the Young Americans in a show, crafted in just three days!  Prior to each workshop, the cast of the Young Americans first rehearses and stages the show they bring to each community. Emily loved rehearsing and touring with the Young Americans, but it took a lot of dedication, hard work, and time.  Long hours were spent in the YA Warehouse learning and perfecting material in a short period of time.  The YA’s put full tour shows together in less than two weeks, so long days were expected.  However, some of Emily’s favorite Young American memories are from long days rehearsing.  She reminisces, “When your cast was rehearsing in one room, and another cast was in the other room, feeling and feeding off of each other’s energy, showing each other your performances and spending time with your friends before you depart for tours always made for a great rehearsal experience.”

Emily reflected on her training at Chester Valley Dance Academy, and how it helped her throughout her time with the Young Americans.

Dance offers a wonderful foundation. You learn how to carry yourself gracefully and also learn how to be accountable for yourself and your fellow team of dancers. When training in a very serious setting starting at a very young age, you mature quickly and that became second nature to me… (even though some of my teachers would consider me a talker!) Going into Young Americans, of course, I had the proper training to be able to pick up dances easily and put on stage makeup, but I also knew how to act in rehearsals as well as how to respect my teachers and fellow peers.

Once the shows were set, staged, and perfected, Emily and the Young Americans would bring their shows all over the world.  With each tour, Emily traveled to a new part of the world and had a one of a kind experience.  She summarized her tour life, “Overall, touring is a blast… but, it’s not for everyone! Basically, you leave for a part of the U.S. or an international country for 3 months at a time with 50 of your best friends. You see the world, learn cultures, languages, homestay with great families, eat new foods, teach kids, perform in all different sorts of venues from theaters to castles to jails (yes, I said jail) to barns (yes, I said barns) to churches to school gyms. The list goes on and on and on!”

For Emily, the hardest part about touring was never being on a set schedule.  She and the Young Americans moved from city to city every three to five days, sleeping in different types of beds, or sometimes on the tour bus, eating a variety of foods, dancing on different types of floors with varied temperature.  One of the most important things Emily learned was how to take care of your mind, body, and spirit when you do not have a daily routine to be used to. Additionally, Emily noted that it was even harder to stay in touch with her loved ones while on tour, “ Another difficult part was staying engaged with world news and keeping up with family. While I was touring iPhones weren’t in everyone’s hands, yet, so at times I felt very disconnected from the world and what was going on it felt like I was living in a bubble.”

The Young Americans workshops are for students of all ages.  Throughout her tours, Emily met a number of astonishing and talented students, as well as students who were introduced to the performing arts for the very first time.  Emily found that her favorite memories were working with kids:

Some of my favorite memories on the road were with the kids. It’s all about the kids and watching them grow and find confidence in themselves in just three days was extremely rewarding. The kids weren’t always on board with our program and sometimes it felt like pulling teeth just to get them to come out of their shell. But, once they did, we were SO excited for them and just never wanted it to end! Leaving towns where you would really make a connection with a student was always hard but knowing both lives were impacted in a positive way was always the cherry on top!

Emily’s favorite tour destination was Japan, however, as she and the cast of Young Americans were loading into a theater in Narita to start their first day of the workshop, the 2011 earthquake happened. Emily shares her story and her experience below:

We canceled the workshop and slept at the theater for 3 days where we were safe, fed and taken care of by some amazing people who were to be our host families. A week or so later the tour was canceled and we all got on a plane back to California. We were devastated! Since that trip, I’ve visited Japan more 3 times and have seen the damage in Tohoku. I took my 6th trip there in 2015 to celebrate 10 years of The Young Americans touring in Japan. On March 11, 2011 my life was changed. I’ll never be able to fully describe how my life was changed and I’ll never be able to thank or repay the people of that beautiful country for everything they have done for the Young Americans and for me personally. Not once growing up in Spring City, Pennsylvania did I ever think I would be so in love with the country of Japan! Japan is a special place that has taught me patience, kindness, joy, and respect. March 11, 2011 was a devastating day and year after year I will remember all the terrible things that happened; homes, land, and families were destroyed. I’ll also remember and pray for those who survived have come together as a community and country to get through and rebuild Tohoku.

My experience was one of a kind, it’s truly a 24/7 job for 3 months straight, which I did 3 times in a row! I was 22 years old taking groups of forty-eight, 18-23-year-olds to Japan, twice, and the East Coast. I really had no idea what I was doing so, I just had to believe in myself and get the job done. I had to ensure that my cast was healthy, happy and safe at all time. If they weren’t, I had to find ways to fix it by going to the doctor with them, having one on one time, keeping in touch with their parents, updating the Young American directors every day, making sure their homestays were comfortable and they were fed etc. On the flip side, I was the face of the Young Americans, representing an entire organization every time we entered a school. I worked with the administration, teachers, and contacts to make sure we had all of the proper spaces to be able to teach and perform effectively. In addition, I organized ticket sales, bus rides, meals, and per-diem etc. I absolutely LOVED being a company manager and miss it often.

After her last Japan tour with the Young Americans in 2012, Emily moved to North Hollywood, California and began freelancing in event and television production.  She worked on the set of ABC’s “Wipeout”, planned and worked numerous Nike events around Southern California, and spent the summer of 2013 touring with Toyota and Lifetime Fitness.  During this time, Emily was asked to return to The Young Americans to be one of the four New Kid Directors for the New Kid Class of 2013, a position she truly enjoyed.  After Directing the New Kid Class of 2013, Emily received a full-time job working as an Executive Assistant at an event company in Los Angeles that produced non-profit events.  After 1 year as the CEO’s assistant, Emily realized event planning was her passion and switched to the company’s event operations team as an Event Operations specialist.  Shortly after planning events for this company, she became the Supervisor of Event Operations for the AIDS Walk New York and AIDS Walk Los Angeles.

Currently, Emily is living in Brooklyn, New York City and works for an Experiential Marketing company called On Board Experiential.  She’s the Account Manager on the J.P. Morgan account and their event is the J.P. Morgan Corporate Challenge, the largest corporate sporting event in the world.  In 2017, Emily was tasked to manage all seven U.S. events out of the thirteen races in the series; Chicago, New York City, Boston, San Francisco, Syracuse, Buffalo, and Rochester.  In 2018, Emily will be adding some international cities to her list.  For the 7th year in a row, On Board Experiential has made Event Market’s IT List as well as Best Places to Work in Events List in 2017.  Emily loves working for On Board Experiential and absolutely loves her team!

From rehearsing and performing, to managing a touring company, to planning and executing national events,  Emily gained quite the skill set.  She finds her ability to  “Make it Work” the most helpful while juggling all of the responsibilities of her career.  A phrase she heard often with The Young Americans, Emily says, “You are always getting thrown curveballs in the event world so being able to make any situation work really goes a long way!”  During Emily’s time with the YA’s the cast not only performed but was also the setup and teardown crews.  Having the experience managing sound systems, lights, AV, costumes, props, loading and unloading tour trucks really become handy in the world of event planning.  Emily has gained so many skills through the performing arts that have helped her through her various careers.

For all of the CVDA Dancers who wish to pursue the performing arts, Emily shares these words, “Learn to love and appreciate singing and acting as much as you love to dance and more importantly; if you have a dream follow it because you only live once!”